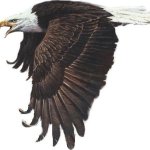 On June 18th of 2022 I celebrated the 50th anniversary of my musical career. At the Colonnade in North Georgia I was joined by 500 friends and one special eagle (Challenger) to sing songs tell stories and share our memories. It was an unforgettable night. The week preceding the event had also been amazing as special recognition from the state of Georgia was received when Debbie and I visited the State capital with Senator Jeff Mullis and Governor Brian Kemp. Overwhelming is a pretty good way of summing it up, and that is exactly how it felt.

I have received many words of congratulations that were all special to my heart, including a beautiful video message from my friend Dolly Parton and all will be cherished me and my family.

While having breakfast with some friends I was asked by Mike Prater if I would sign my autograph on a blank piece of white typing paper. When I asked “what is this for?” he simply said “It’s just a surprise”. I said “OK” and I did.

Mike Prater is the owner and founder of Painted Pony Design Company. They specialize in knife making. He is a world class knife maker. If you would care to look him up just google Painted Pony designs. His company produces thousands of knives weekly that are shipped all over the world to stores and showrooms.

A few weeks past, but I then received a phone call from Mike who asked if I could stop by his showroom and plant in Flintstone, GA… He said I have something for you.
He did indeed.
Mike presented me with two knives. One is a Bowie hunter style knife, and the other is a two bladed trapper folding knife. Both have my signature on them and are just beautiful. (I hope the photos will do them justice). The blade of the Bowie knife is inscribed with sheet music for my song “Fly Eagle Fly”. Mike told me that he had previously made special knives for country music performers Eddie Raven, Travis Tritt, and Charlie Daniels as well as rock n roller James Hetfield of Metallica. My knife will join the signature series. Quite an honor… I am presenting them to you in the photos here on this webpage. (I hope the photos will do them justice). If you are interested you can have one also. It will be numbered, registered, and come with a certificate of authenticity.

No, I am not in the knife business. So many people who have seen these knives however have told me how beautiful they are and also expressed an interest in having one of their own. 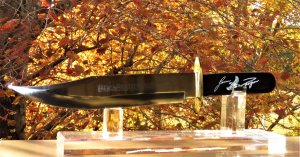 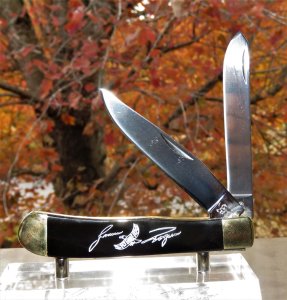 Where am I playing next?
See the Show Schedule over at Friends of James Rogers

Your shopping cart is empty.